In this tutorial you will apply the strong/weak constraint, dual form of 4-Dimensional Variational (4D-Var) data assimilation based on the Physical-space Statistical Analysis System (PSAS) algorithm (4D-PSAS) to ROMS configured for the U.S. west coast and the California Current System (WC13). In 4D-PSAS the search for the best ocean circulation estimate proceeds in the space spanned only by the observations, as opposed to the full space spanned by the model (i.e. the primal form, I4D-Var). Formally, the primal and dual formulations yield identical estimates of the ocean circulation so one might wonder if there is any advantage of one form over the other? The practical advantages and disavantages to both approaches are discussed in Moore et al. (2011b, c).

To run this tutorial, go first to the directory WC13/PSAS. Instructions for compiling and running the model are provided below or can be found in the Readme file. The recommended configuration for this exercise is one outer-loop and 50 inner-loops, and roms_wc13.in is configured for this default case. The number of inner-loops is controlled by the parameter Ninner in roms_wc13.in.

The following files will be found in WC13/PSAS directory after downloading from ROMS test cases SVN repository:

Several Matlab scripts are provided in the directory WC13/plotting which will allow you to plot some of the 4D-PSAS output.

Recall that 4D-PSAS minimizes the cost function given by:

Plot first the 4D-PSAS cost function and its components , and the theoretical minimum value using the Matlab script plot_psas_cost.m.

The 4D-PSAS cost function value for each inner loop iteration is shown below: 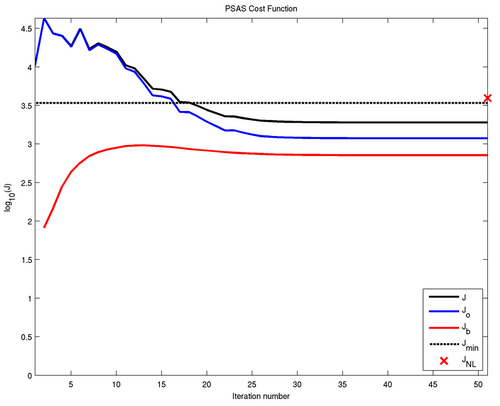 The 4D-PSAS initial conditions increments at 100m for temperature (°C), salinity, and momentum components (m/s) are shown below:

A cross-section along 37°N for the 4D-PSAS initial conditions increments is shown below. 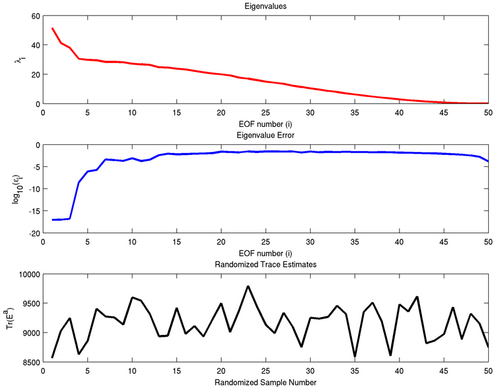 The 4D-PSAS posterior analysis error covariance (EOF 1) at 100m for temperature (°C), salinity, and momentum components (m/s) are shown below:

A cross-section along 37°N for the 4D-PSAS posterior analysis error covariance (EOF 1) is shown below. 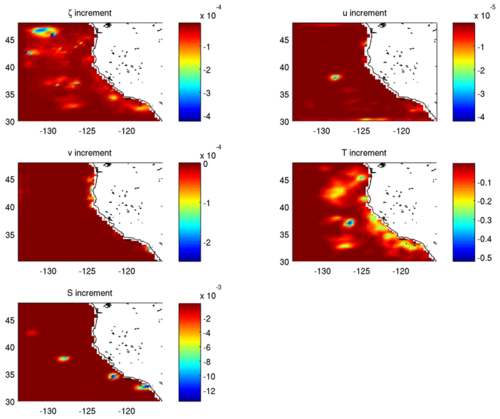