During this exercise you will apply the primal form of incremental strong constraint 4D-Var (I4D-Var) to ROMS configured for the U.S. west coast and the California Current System (CCS). This configuration, referred to as WC13, has 30 km horizontal resolution, and 30 levels in the vertical. While 30 km resolution is inadequate for capturing much of the energetic mesoscale circulation associated with the CCS, WC13 captures the broad scale features of the circulation quite well, and serves as a very useful and efficient illustrative example of I4D-Var.

To run this exercise, go first to the directory WC13/I4DVAR. Instructions for compiling and running the model are provided below or can be found in the Readme file. The recommended configuration for this exercise is one outer-loop and 50 inner-loops, and roms_wc13.in is configured for this default case. The number of inner-loops is controlled by the parameter Ninner in roms_wc13.in.

The following files will be found in WC13/I4DVAR directory after downloading from ROMS test cases SVN repository:

Several Matlab and plotting package scripts are provided in the directory WC13/plotting to plot some of the I4D-Var output:

Recall that I4D-Var minimizes the cost function given by:

Plot first the I4D-Var cost function and its components , and the theoretical minimum value using the Matlab script plot_i4dvar_cost.m.

The I4D-Var cost function value for each inner loop iteration is shown below: 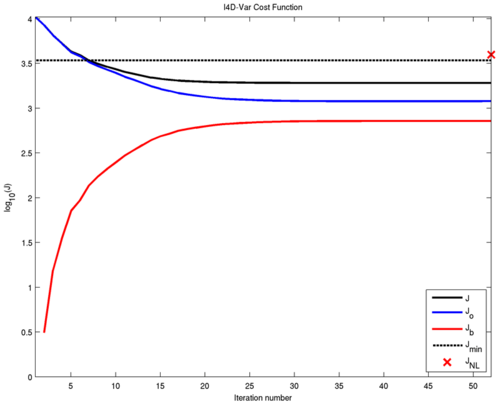 The I4D-Var initial conditions increments at 100m for temperature (°C), salinity, and momentum components (m/s) are shown below:

A cross-section along 37°N for the I4D-Var initial conditions increments is shown below.