Notice: This algorithm began based on the Physical-space Statistical Analysis System (PSAS) algorithm but has evolved into a Restricted B-preconditioned Lanczos 4D-Var (RBL4D-Var). Some plots on this page still have the PSAS title but remain correct. The algorithm and ROMS CPP Options relating to this data assimilation system were renamed in SVN revision 1022 (May 13, 2020) and are explained in Trac ticket #854.

To quantify the impact of the observations on the forecast skill it is necessary to run a second forecast which is initialized from the background solution at the end of the analysis cycle. This is represented by the green curve in Diagram 1. The difference in forecast skill between the red forecast and the green forecast is then due to the observations that were assimilated into the model during the analysis cycle.

In this tutorial, the methodology will be described by two metrics in Case 1 and Case 2: 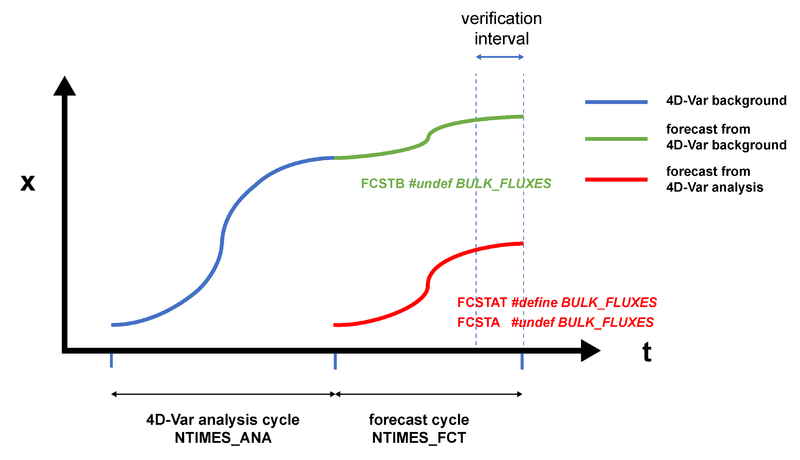 To run this exercise, go first to the directory WC13/RBL4DVAR_forecast_sensitivity. Instructions for compiling and running the model are provided below or can be found in the Readme file. The recommended configuration for this exercise is one outer-loop and 50 inner-loops, and roms_wc13.in is configured for this default case. The number of inner-loops is controlled by the parameter Ninner in roms_wc13.in.

For intermediate Step 1, the following files will be found in WC13/RBL4DVAR_forecast_sensitivity/FCSTAT directory after downloading from ROMS test cases SVN repository:

For intermediate Step 2, the following files will be found in WC13/RBL4DVAR_forecast_sensitivity/FCSTA directory after downloading from ROMS test cases SVN repository:

For intermediate Step 3, the following files will be found in WC13/RBL4DVAR_forecast_sensitivity/FCSTB directory after downloading from ROMS test cases SVN repository:

For steps 5 and 8, the following files will be found in WC13/RBL4DVAR_forecast_sensitivity directory after downloading from ROMS test cases SVN repository: