For computational economy, the hydrostatic primitive equations for momentum are solved using a split-explicit time-stepping scheme which requires special treatment and coupling between barotropic (fast) and baroclinic (slow) modes. A finite number of barotropic time steps, within each baroclinic step, are carried out to evolve the free-surface and vertically integrated momentum equations. In order to avoid the errors associated with the aliasing of frequencies resolved by the barotropic steps but unresolved by the baroclinic step, the barotropic fields are time averaged before they replace those values obtained with a longer baroclinic step. A cosine-shape time filter, centered at the new time level, is used for the averaging of the barotropic fields (Shchepetkin and McWilliams, 2005). In addition, the separated time-stepping is constrained to maintain exactly both volume conservation and consistancy preservation properties which are needed for the tracer equations (Shchepetkin and McWilliams, 2005). Currently, all 2D and 3D equations are time-discretized using a third-order accurate predictor (Leap-Frog) and corrector (Adams-Molton) time-stepping algorithm which is very robust and stable. The enhanced stability of the scheme allows larger time steps, by a factor of about four, which more than offsets the increased cost of the predictor-corrector algorithm.

In the vertical, the primitive equations are discretized over variable topography using stretched terrain-following coordinates (Song and Haidvogel, 1994). The stretched coordinates allow increased resolution in areas of interest, such as thermocline and bottom boundary layers. The default stencil uses centered, second-order finite differences on a staggered vertical grid. Options for higher order stencil are available via a conservative, parabolic spline reconstruction of vertical derivatives (Shchepetkin and McWilliams, 2005). This class of model exhibits stronger sensitivity to topography which results in pressure gradient errors. These errors arise due to splitting of the pressure gradient term into an along-sigma component and a hydrostatic correction (for details, see Haidvogel and Beckmann, 1999). The numerical algorithm in ROMS is designed to reduce such errors (Shchepetkin and McWilliams, 2003).

In the horizontal, the primitive equations are evaluated using boundary-fitted, orthogonal curvilinear coordinates on a staggered Arakawa C-grid. The general formulation of curvilinear coordinates includes both Cartesian (constant metrics) and spherical (variable metrics) coordinates. Coastal boundaries can also be specified as a finite-discretized grid via land/sea masking. As in the vertical, the horizontal stencil utilizes a centered, second-order finite differences. However, the code is designed to make the implementation of higher order stencils easily.

ROMS has various options for advection schemes: second- and forth-order centered differences; and third-order, upstream biased. The later scheme is the model default and it has a velocity-dependent hyper-diffusion dissipation as the dominant truncation error (Shchepetkin and McWilliams, 1998). These schemes are stable for the predictor-corrector methodology of the model. In addition, there is an option for conservative parabolic spline representation of vertical advection which has dispersion properties similar to an eight-order accurate conventional scheme.

There are several subgrid-scale parameterizations in ROMS. The horizontal mixing of momentum and tracers can be along vertical levels, geopotential (constant depth) surfaces, or isopycnic (constant density) surfaces. The mixing operator can be harmonic (3-point stencil) or biharmonic (5-point stencil). See Haidvogel and Beckmann (1999) for an overview of all these operators.

The vertical mixing parameterization in ROMS can be either by local or nonlocal closure schemes. The local closure schemes are based on the level 2.5 turbulent kinetic energy equations by Mellor and Yamada (1982) and the Generic Length Scale (GLS) parameterization (Umlauf and Burchard, 2003). The nonlocal closure scheme is based on the K-profile, boundary layer formulation by Large et al. (1994). The K-profile scheme has been expanded to include both surface and bottom oceanic boundary layers. The GLS is a two-equation turbulence model that allows a wide range of vertical mixing closures, including the popular k-kl (Mellor-Yamada level 2.5), k-e, and k-w schemes. Several stability functions (Galperin et al., 1988; Kantha and Clayson, 1994; Canuto et al., 2001) have been also added to provide further flexibility. A recent study (Warner et al., 2005a) evaluated the performance of these turbulence closures in ROMS in terms of idealized sediment transport applications. In addition, there is a wave/current bed boundary layer scheme that provides the bottom stress (Styles and Glenn, 2000) and sediment transport which become important in coastal applications.

Currently, the air-sea interaction boundary layer in ROMS is based on the bulk parameterization of Fairall et al. (1996). It was adapted from the COARE (Coupled Ocean-Atmosphere Response Experiment) algorithm for the computation of surface fluxes of momentum, sensible heat, and latent heat. This boundary layer is used for one or two-way coupling with atmospheric models.

ROMS is a very modern code and uses C-preprocessing to activate the various physical and numerical options. The code can be run in either serial or parallel computers. The code uses a coarse-grained parallelization paradigm which partitions the computational 3D grid into tiles. Each tile is then operated on by different parallel threads. Originally, the code was designed for shared-memory computer architectures and the parallel compiler-dependent directives (OpenMP Standard) are placed only in the main computational routine of the code. An MPI version of the code has been developed so both shared and distributed-memory paradigms coexist together in a single code.

ROMS is a very modern and modular code written in F90/F95. It uses C-preprocessing to activate the various physical and numerical options. Several coding standards have been established to facilitate model readability, maintenance, and portability. All the state model variables are dynamically allocated and passed as arguments to the computational routines via de-referenced pointer structures. All private or scratch arrays are automatic; their size is determined when the procedure is entered. This code structure facilitates computations over nested and composed grids. The parallel framework is coarse-grained with both shared- and distributed-memory paradigms coexisting in the same code. The shared-memory option follows OpenMP 2.0 standard. ROMS has a generic distributed-memory interface that facilitates the use of several message passage protocols. Currently, the data exchange between nodes is done with MPI. However, other protocols like MPI2, SHMEM, and others can be coded without much effort.

ROMS has extensive pre and post-processing software for data preparation, analysis, plotting, and visualization. The entire input and output data structure of the model is via NetCDF which facilitates the interchange of data between computers, user community, and other independent analysis software. 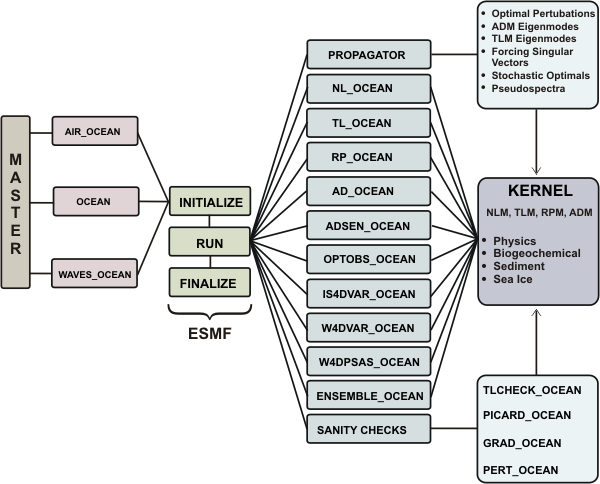 The current ROMS framework diagram is shown above. It illustrates various computational pathways: standalone or coupled to atmospheric and/or wave models. It follows the Earth System Modeling Framework (ESMF) conventions for model coupling: initialize, run and finalize. The dynamical kernel of ROMS is comprised of four separate models including the nonlinear (NLM), tangent linear (TLM), representer tangent linear (RPM), and adjoint (ADM). There are several drivers to run each model (NLM, TLM, RPM, and ADM) separately and together. The drivers shown in the propagator group are used for Generalized Stability Theory (GST) analysis (Moore et al., 2004) to study the dynamics, sensitivity, and stability of ocean circulations to naturally occurring perturbations, errors or uncertainties in forecasting system, and adaptive sampling. The driver for adjoint sensitivities (ADSEN) computes the response of a chosen function of the model circulation to variations in all physical attributes of the system (Moore et al., 2006). It includes drivers for strong (S4DVAR, I4DVAR) and weak (R4DVAR) constraint variational data assimilation (Di Lorenzo et al., 2006). A driver for ensemble prediction is available to perturb forcing and/or initial conditions along the most unstable directions of the state space using singular vectors. Finally, several drivers are included in the sanity check group to test the accuracy and correctness of TLM, RPM, and ADM algorithms.