I am trying to set-up the model for the Eastern Pacific with a 20 km resolution and 40 vertical levels. In the northern part there is always a lot of over mixing. I am blaming the mixing since once I turn off LIMIT_VVISC the noise disappears.
I think it is due to buoyancy/wind mixing, since with a weak analytical forcing it doesn't appear. I am running COAWST but the noise is there both when I use it coupled and when I force it with ERA5. 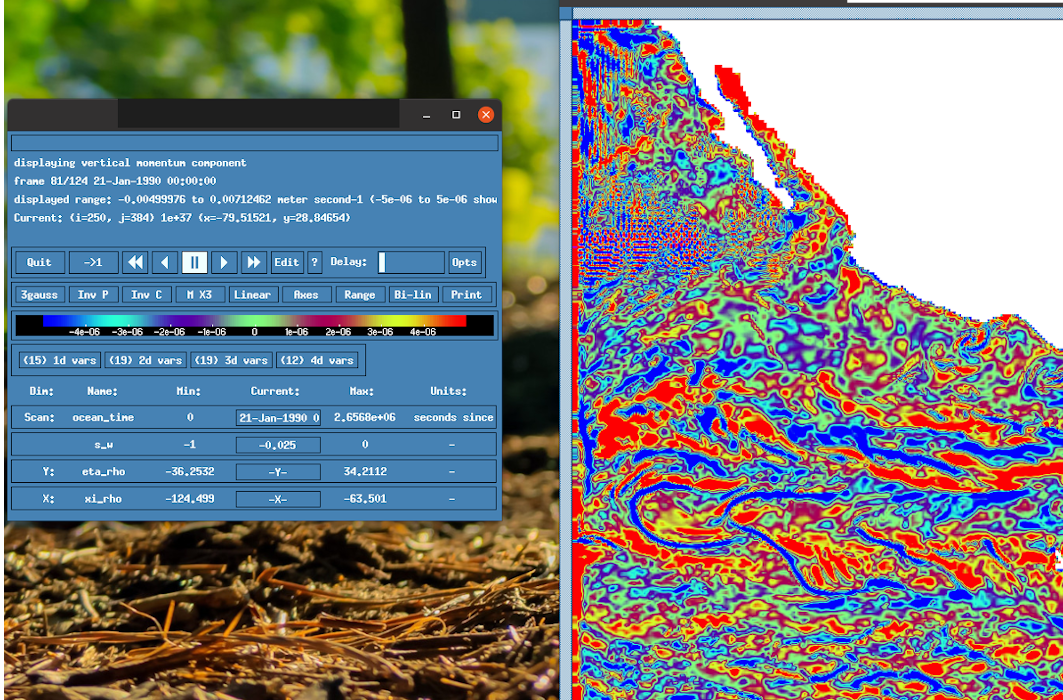 I have tried to run with GLS (k-epsilon, k-omega, generic) YM25 and LMD. I thought that LMD was going to solve the problem but the noise is still there if not even a bit worse.
I turned off and on SPLINES and tried to change the value of the viscosity, nothing worked.
I also tried to increase the vertical levels to 50, to check if resolving better the mixed layer would help a bit.

At the beginning I thought it was a noisy boundary, since it begins to appear as stripes next to the western boundary and so I tried several combinations of boundaries + nudging and a sponge layer.
I also did some tests changing the tiling.

I have run out of ideas of what I might be doing wrong, so any advice would be more than welcome.

if you undef the limit, what are the values of AKV? if they are above 1e-3, then your limiters are preventing the mixing. that could be the issue.
try it with the limit activated, and set the values to 1.0d0 and see if that works.
-j
Top

I am a bit confused, I think there are some gaps in my understanding.
If I set the limit to 1 is it not too high? Doesn't it mean that the model is mixing too much?
I am also worried abou the stripes, why the mixing would be prevented with this kind of pattern?

Thanks a lot for all the help!
Top

all this limit does is put a maximum value on the AKt and AKv. if you set it to 1e-5 (a very low example) then the mixing will never get above those values (not recommended).
If you set it to 10, then the mixing will never go above 10. It doesnt mean that the mixing is 10 everywhere, is just means that the values can never go above 10.
so perhaps there are some locations on the boundary that are having a mismatch between what the model is computing and what is on the boudnary, and perhaps the model wants to mix that out. i am not sure. but then the mixing values could get large for a brief moment in time at a local grid cell. I suggest you write out the AKt and AKv values and see what they get to, and where.
Top

I had a similar problem a long time ago when I was (re)starting the model from the "slightly" vertically unbalanced initial state.
If you have a mismatch btw your initial state and boundary then it might happen.
If you grep in the roms source you'll see it is acting as a limiter.

I don't think the vertical mixing of my model is working fine.
If I check AKv with the limiter, just the layer befow the surface the value is too high almost everywhere in the model. The area where the stripes appear is where AKv at the limit persists for longer in the vertical.

The values go as high as 0.03, setting the limit at 1, but I don't see any particular patter next to that boundary.

AKt has a similar behaviour expect for the surface where it get fixed at the background value 1e-6 after few times steps. I am struggling to understand why.

It happens both when I run ROMS force with ERA5 and COAWST coupled with WRF.
I did some tests with a sponge layer in the past since I blamed that boundary too, the patter disappears in the sponge layer where I set a higher viscosity but keeps appearing next to it.

A colleague is running a similar set-up in a different area and has the same problem, even after running for a while.

Thanks for your time and all the advices.
Top
Post Reply
6 posts • Page 1 of 1